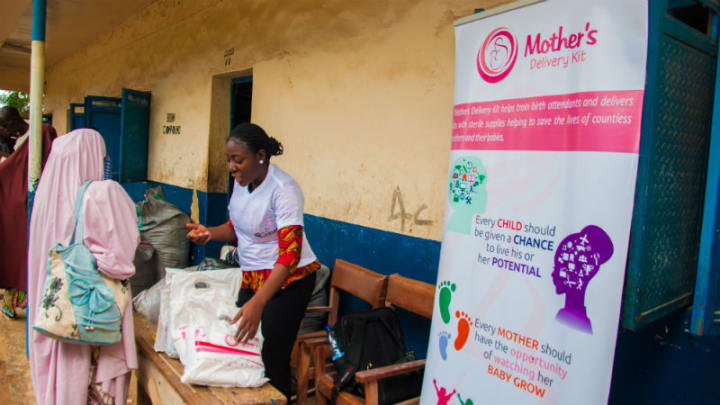 posted by dataville
categories
Be the first to recommend this:

Adepeju Jaiyeoba, a lawyer by training, created a simple, low-cost Mother’s Delivery Kit targeted to low-income, rural communities who may not be able to afford institutional care or do not have access to any. Photo by: Brown Button Foundation

LAGOS, Nigeria — Lebabatu Musa has been delivering babies for 13 years in Kafur, a village in Northwestern Nigeria’s Katsina state. Her work is complicated by the fact that hospitals in the area don’t always have the necessary equipment to treat their patients, nor the personnel to offer additional trainings to staff.

The use of condoms as a form of birth control, for example, was a practice Musa was unfamiliar with until a recent training offered by a local foundation. It wasn’t a topic she had been taught in school, she told Devex, and although condoms are sometimes available in her community, their use has not been advocated for by the hospitals or community health centers she has worked in.

Musa studied for three years at a school for health and nursing in Malumfashi to become a community health worker, but “there are no doctors in our schools, only health personnel,” Musa shared of her training.

As a result of inadequate health facilities and a lack of skilled personnel, 814 women will die for every 100,000 live births in Nigeria, according to a 2015 estimate from the World Health Organization.

Presently, less than 20 percent of health facilities offer emergency obstetric care and only 35 percent of deliveries are attended by skilled birth attendants. In Katsina, where Musa works, 5.1 percent of women were delivering their children in facilities in 2008, according to data from the United Kingdom government-funded, country-led Maternal and Newborn Child Health Programme. In 2017, the number had risen to 20.8 percent. Still, women across Nigeria’s densely populated northern region choose to give birth at home with the help of a traditional birth attendant.

Adepeju Jaiyeoba and Temie Giwa-Tubosun, two entrepreneurs who faced complications in their own pregnancies, are now leveraging technology to address the gaps in skills and resources that cost many new mothers their lives across the West African country.

Drawing on their personal experience, hyperlocal knowledge, and relying on simple innovations, the two women are determined to increase the odds of survival for new mothers, whether in urban Lagos or rural Zamfara.

The loss of a friend, and the birth of a low-cost delivery kit

Seven years ago, Jaiyeoba’s family friend opted to deliver her baby at Obafemi Awolowo University’s reputable teaching hospital in Southwestern Nigeria. The delivery would be safe, she thought, since the university is known for producing some of the most respected medical doctors in the country. But the young mother bled to death after a graduate doctor severed an artery while conducting a cesarean procedure and failed to take immediate action to repair it.

In response, Jaiyeoba, a lawyer by training, created a simple, low-cost Mother’s Delivery Kit targeted to low-income, rural communities who may not be able to afford institutional care or do not have access to any. This delivery kit helps women like Musa — community health workers and traditional birth attendants who are often the sole health care provider in rural areas — to deliver babies safely and hygienically. The kit is currently distributed to rural communities in 30 out of Nigeria’s 36 states.

Now, it’s Jaiyeoba’s own experience that drives her. While pregnant, she sought care at an expensive Lagos-based hospital to find out why she was tired, weak, and experiencing dizzy spells. She was told her blood pressure was low and given supplements to take. Jaiyeoba’s symptoms didn’t improve, and she would later find out on a medical trip to the United States that in fact, the iron supplements sold to her at a local Nigerian pharmacy recommended by the hospital were fake.

The Mother’s Delivery Kit — which costs 1,700 Nigerian naira ($4.74) but is provided for free to health workers during trainings — contains misoprostol, a life-saving pill used to prevent bleeding rather than control it. It also carries a mucus extractor used to prevent asphyxia in newborns. Adhesive pads are included in order to control bleeding temporarily in the event a woman needs to be transferred to a facility.

“With the kits, we have been able to not only encourage, but create behavioral change,” Jaiyeoba said in an interview at her Lagos home.

Before the kit, birth attendants in rural communities would attend to women on reused plastic sheets, for example, and then attempt to disinfect them with warm water and salt. Unknowingly, the practice put their next clients at risk of infection. The kit has provided an alternative in the form of a stark white, absorbent delivery mat, which stains immediately after use so attendants aren’t tempted to recycle it, Jaiyeoba said.

Alongside the Mothers’ Delivery Kit Jaiyeoba created, which was funded through grants from organizations such as the United States African Development Foundation, she also set up the Brown Button Foundation to train women on how to use the kit and any other skills they might be lacking. Brown Button also improves access to more formal health care by encouraging health workers to refer cases beyond their capacity to better-qualified facilities when the option exists, Jaiyeoba said.

Jaiyeoba’s work has not been without resistance or roadblocks. Given the religious, conservative nature of many rural Nigerian communities, she must first seek approval for her work from male members of the community. She is also often caught in competing political interests of different agencies or local government authorities — from which she must also seek approval — who seek to stake ownership of the work. For instance, a state health board and a local government chairman may delay launch because of a disagreement of who will present to the people, Jaiyeoba explained.