Can Better Warnings About Dangerous Crossings Stem the Tide of African Migrants?

AGADEZ, Niger — In the middle of Niger’s sweltering Sahara desert and far from home, Koné Bingoro lies on one of four beds in a cramped room. He’s propped up on one elbow, texting. The 29-year-old’s right leg hangs casually over the metal bed frame, a thin blanket covers his left.

After a failed journey to Libya and a thwarted attempt at passage to Italy in search of work, Bingoro is resting at the International Organization for Migration’s Agadez camp while waiting to go home to Côte d’Ivoire. Almost 300 young men and a handful of women from across West Africa are also staying at the camp, many of them returned from similar attempts. Some will try again; most will go home with IOM’s help.

Bingoro shifts the blanket, revealing a bright white bandage on his lower leg where his left foot should be, an extremity that was amputated due to infection shortly after he arrived in Agadez.

For the young mechanic, this room is the end of a four-month journey in search of a better life — one that went very wrong, and one he might not have embarked upon had he known the danger that awaited him.

This month, IOM is launching the “Aware Migrants” communication campaign to build on their 2016 efforts to formalize the information process for those considering the journey from Agadez to Libya, Algeria or Italy.

IOM is careful to specify that the campaign is not a standalone answer to migration — a problem that will require a “comprehensive” approach — nor is it meant to “dissuade” potential migrants from migrating irregularly across the Sahara desert, through Libya and across the Mediterranean Sea, said Flavio Di Giacomo, a spokesperson with the IOM Coordination Office for the Mediterranean, during an online press conference last week.

But it is meant to counter the rumors of easy journeys and of the guaranteed prosperity and health services that await in Europe. Eye-opening stories of illegal detention, physical abuse, forced labor, rape, robbery and the perils of desert and sea crossings, meanwhile, are far less often recounted by survivors.

The number of migrants who have made the journey from sub-Saharan Africa to Europe has surged in the past four years. In 2014, an estimated 9,000 Nigerians arrived in Italy. Two years later, the number had jumped to 37,000. Increasing numbers of people are also coming from Eritrea, Guinea, Côte d’Ivoire, The Gambia, Senegal, Mali and Sudan. But deaths in the Mediterranean rise concurrently, from 3,700 estimated deaths in 2015 to more than 5,000 in 2016, according to Di Giacomo.

The number of people who die in the Sahara desert is unknown, but it is thought to be “huge,” Di Giacomo added.

Still, Niger’s centrally located city of Agadez continues to draw migrants from across the continent, having developed a reputation as a way station to buy provisions, identify a smuggler and make last minute plans before driving through the Sahara to Libya. Nigerien authorities estimated that between 120,000 and 150,000 migrants transited Niger in 2016.

Often, migrants plan to go no farther than North Africa. But human rights abuses and poor living conditions in Libya see them putting the last of their savings toward boat passage, often in cheap rubber dinghies, to make the perilous sea crossing to Europe.

In the past year, aid groups working in migration have interviewed thousands of sub-Saharan African migrants with similar stories — of being told the Mediterranean is a shallow river to be crossed, or that the vast, lawless no man’s land that separates Agadez and Libya is nothing but a day’s drive. Other concerns are easily swept away with talk of friends, family or money awaiting them in Europe. Migrants continue to make the journey — and become casualties along the way.

It was hope for a better paying job as a large truck mechanic that propelled Bingoro to leave his home and head for Libya. After four months struggling to survive in the country, he decided Europe was his best option, but smugglers robbed Bingoro of his boat passage savings in Tripoli. Instead, he joined a group making the journey back to Niger and called on friends to loan him money for the trip.

He didn’t make it far before armed bandits attacked his truck in the desert to rob them of what little money they still had. It was an infected gunshot wound that cost Bingoro his foot.

Recalling the life-threatening risks along their journeys is often very distressing, and most migrants wish to forget and move forward with their lives rather than share their experience with peers who are still back home, according to Di Giacomo.

For his part, Bingoro knew of some of the dangers, he said, but since arriving in Agadez he has listened to more news and has talked to others who have had similar experiences. He can’t say for sure whether he would have still made the journey had he known more beforehand.

“It’s my destiny; only God decides,” he said. Now, he’s just happy to be alive.

This is a commonly heard refrain from returned migrants, according to Monica Chiriac, media and communications officer for IOM. When she visits the ghettos, or informal settlements where migrants are staying, in Agadez the conversations often turn “very philosophical,” she said.

But a 60-person ghetto she visited in December had dwindled to about 20 in February: “Migrants themselves have said that people have stopped coming because they are more informed nowadays about the dangers of the route,” Chiriac said, although it’s possible they are finding other, equally dangerous, routes instead.

IOM hopes to encourage story sharing and to reach even more migrants before they depart Agadez with the new campaign, Di Giacomo said. Designed to live mainly on Facebook, where migrants communicate their journey and many smugglers advertise their services, the campaign will collect testimony of migrants arriving in Italy, as well as those coming back to Niger from Libya. IOM would also like to see radio and TV spots and one-on-one awareness sessions at the local level, an activity that Catholic Relief Services plans to get involved with in Agadez.

Still, the communications campaign is just one small way to address a larger problem: “A comprehensive approach is needed to address root causes of migration,” Di Giacomo stressed.

The current situation in Agadez requires a two-pronged approach that looks at the needs of migrants, but also of host communities, according to Petra Suric Jankov, Catholic Relief Services Niger business development specialist.

“If they’re willing to take the risks to advance themselves and their families, just telling migrants it’s a dangerous crossing isn’t enough,” Suric Jankov said. “Even if they are better informed, the next thing they’re going to say is: ‘OK, but what other options do we have to create a better life?’”

The same goes for host communities housing migrants, she said. In Agadez especially, a collapsed tourism industry following the 2007-2009 Tuareg Rebellions combined with an increasing migrant population has inspired former tour operators to jump into the lucrative business of smuggling migrants.

Both communities are in dire need of economic alternatives. CRS has proposed a project, designed in partnership with IOM, in Agadez that would provide skill-building, income-generating activities for both host community members and prospective migrants who might make the ultimate decision to head home rather than across the Mediterranean. Under the project, both communities would be able to receive certification in mobile skills such as hair dressing, leather making or welding.

Host communities would also benefit from greater agricultural development, such as improved irrigation and training in market gardening — activities CRS hopes to begin in the next few months in partnership with Caritas Norway.

It’s a promising project in a region with few development actors, Suric Jankov said, and CRS is currently awaiting an answer on the proposal from the government of Norway.

In the meantime, Bingoro waits for his foot to heal so he can go home.

And IOM will wait to see if pushing improved communications and information sharing to busloads of migrants pouring into Agadez diminishes the number who perish or suffer grave injuries while on the search for a better life. 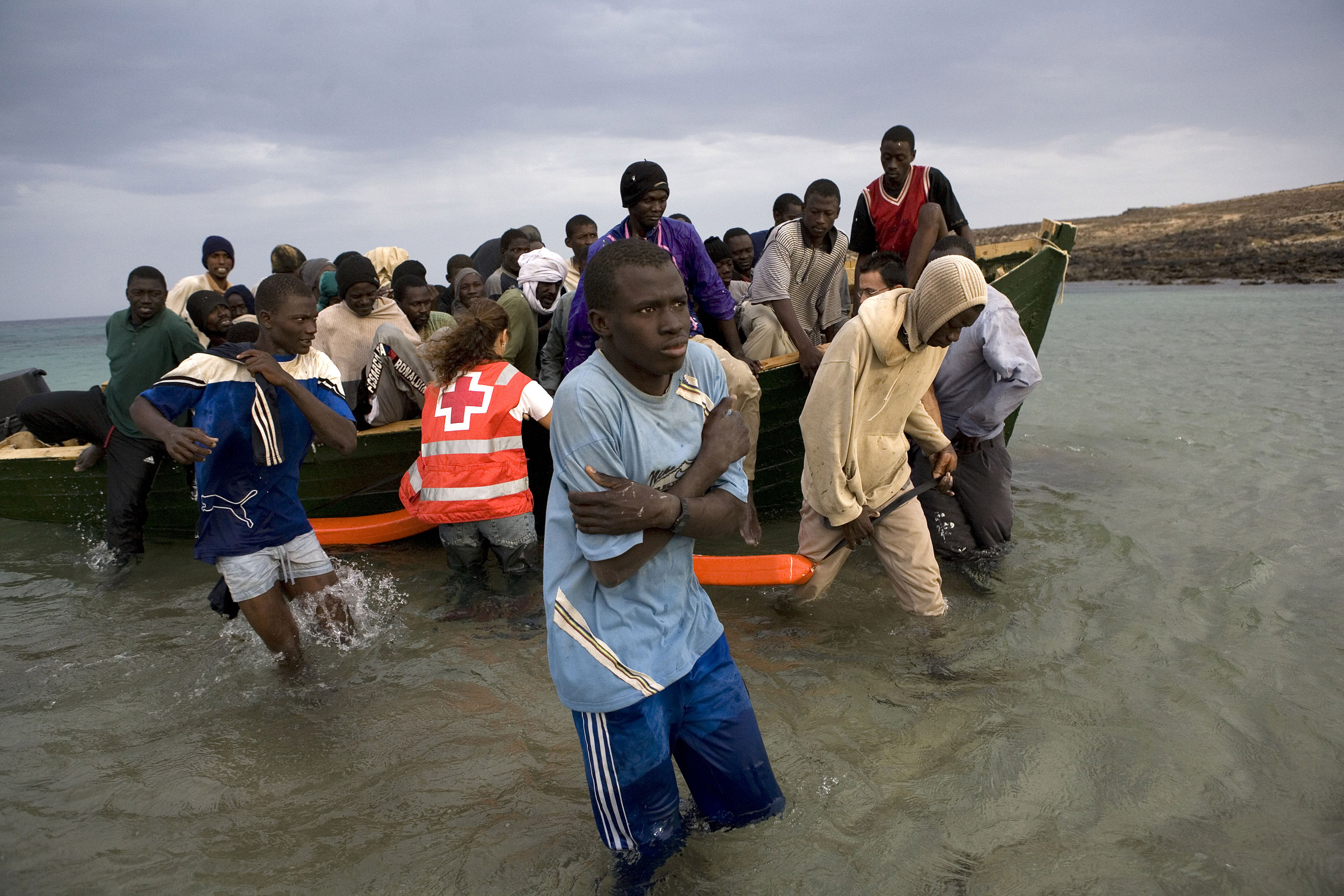